The Shift Has Already Occurred-Wake up – Beautiful Business can change the world for good. 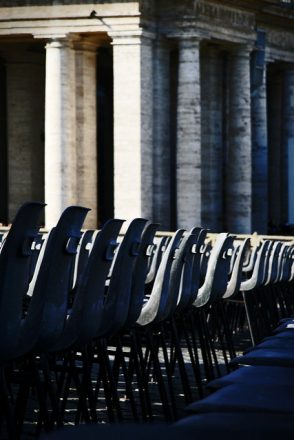 The past few weeks I have been feeling very restless, looking for and finding distractions, not able to focus for any period of time. (This was written in June 23rd, 2008, but is still applicable today)

I am an avid and committed observer of the world news, current affairs, plus have been studying history, and daily read from my greatest teacher, R Buckminster Fuller. Bucky talked about prognostication, that in order to predict the future, one had to draw the string of the arrow very far back into history. And that he did. He studied history and kept records, covering many areas, from energy use, discovery of new elements, technology advancement. In the 30’s he made over 50 predictions, of which 47 have occurred. (Including man on the moon.)

Bucky also started to talk about our ill conceived use of oil and its costs, way back in the 1930’s. He asked a renowned oil geologist, Francois de Chadenedes, to work out how much in energy, from start to finish, over the life time of the creation of oil, would it cost nature to make one gallon of oil. In the currency of the early 1980’s that price was over $1 million per gallon. (See note below for the details of this)

Bucky always based his working premise on the principle of Synergy. That the behaviour of the parts taken separately could not predict the behaviour of the whole, that you could not predict a butterfly from studying a caterpillar, and therefore you had to start, without exception, with the whole. That if we are going to study energy, we had to start with cosmic accounting, and reduce it to local accounting, and not the other way around, which is what we have done. That in cosmic accounting terms the use of petroleum to provide energy was always far far too expensive.

That our energy input from natural resources has always been in far more abundance that we would ever need – sun, wind, waves – and that the only problem with using them as energy source is that big business has not found a way to put a meter between the energy source and the user. (Plus to date our technology around this has been in lag, and the price has been much higher than the use of fossil fuels, although this is changing rapidly, and not helped at all by the large government subsidies paid to big oil.)

And that the nearest nuclear reactor we need is perfectly positioned 152 million kms away, and is called the Sun.

It has always been apparent that oil would run out. We have all been living in a delusional world where this would not happen soon. Now we know that it is happening, faster than we thought.

The bad news is that our lives have already changed. The shift has already occurred. The use of cars, planes, trucks and other oil consumers as they currently exist, is the dinosaur in the room. Petrol prices are not going down, food prices and transport costs likewise are not going down. (Not in real terms…the all-in-accounting terms, when we factor in all costs, all externalities and the future costs to manage fall out.) Not until we create solutions. Which we will do. But not before the situation gets worse for everyone.

I realised today that my sense of restlessness and discombobulation is because the shift has happened, and that I am frustrated that people are going about their business as if it hasn’t, as if the world will go on as we have known it. It can’t and won’t. Everything and everyone is affected. No one escapes this. Travel as we know it, driving to work, school, driving anywhere, how we consume food, how we work, where we live and work, what has value, who has wealth. It all is changing. Fast. The Middle East will lose its oil based power and they know it.

The good news. Well the environment is going to be happy. We simply have to stop our use of fossil fuels. It was always a short sighted strategy. We have all been asleep at the wheel, literally, on that one. In complete denial.

We must emerge through emergency, which we will do, in the nick of time. Creativity will increase as people are forced by necessity to invent new ways of transport, lifestyle, and all the countless other uses of petroleum.

There will be a massive redistribution of wealth. This too will be a good thing, as there is opportunity for an exploration of our money systems, which are in serious need of systems change of the highest degree. And, there will be an opportunity for the gap between the rich and the poor to be re-calibrated. *ten years later, in 2018, we could not have predicted exactly what technology would do this, yet 2008 was the year of the start of bitcoin and blockchain. I still believe that wealth will be distributed within the next few decades.

We will, at least for the briefest moment, consider the long term effects of our next actions. We will start with the whole, and work from there.

More people will challenge solutions and ask more questions, there will be an automatic raising of consciousness. The environment will make that essential. We will not be able to get away with our shortsighted lack of personal responsibility. There will be no sand to stick our head into, no away to go to.

There will be tremendous opportunities. Our lives will be radically different. We will simply have to move towards natures economy. Either that, or not make it.  And there will be very big losses. No one will walk away without being affected in some way.

“You never change things by fighting the existing reality. To change something, build a new model that makes the existing model obsolete.”

We have the opportunity to build the new model. Indeed, many of the new models already exist, and have existed for a long time.

It is an exciting time. People will need support to wrap their heads and hearts around the change. They will go through stress, loss, grief, fear. We will endure. It is our human way, to emerge through emergency.

I write this to urge you to wake up. The shift has happened, and what is occurring now is the lag between the shift and the realisation and daily implication.

Everything has changed. Everything. Yield to it, as nature does, or fight, resist, deny.

The world is in our hands.

Note. “The script of Francois de Chardenedes “Scenario of Petroleum Production” makes it clear that, with all that cosmic-energy processing (as rain, wind, and gravitational pressure) and the processing time (paid for at rates you and I pay for household electrical energy), it costs nature well over a million dollars to produce each gallon of petroleum.” Critical Path, page xxxv.

**2016. Oil prices can go down as a way of manipulation by the large and powerful to crush the small and disruptive.

***2018. My work now centres around supporting the Steward Leader build enterprises that support the success of all of humanity, and Earth. Business can change the world for good, but only if it is designed with integrity as its ground, its why, and its effect.